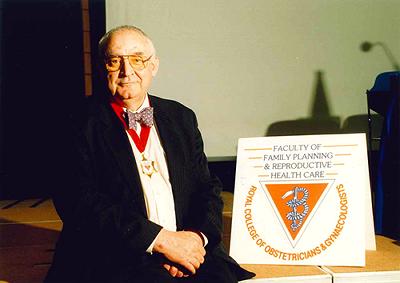 President of the Faculty of Family Planning and Reproductive Healthcare (FFPRHC) from 1997 to 2001 died from cardiac failure, aged 78 on 11th March 2017.

John had a long interest in contraception and reproductive health, starting whilst Senior Lecturer at Kings College Hospital, London where he worked with the World Health Organisation and undertook early work on the copper IUD (Cu7). He joined a small team of like-minded gynaecologists who formed the Medical Advisory Committee of the Family Planning Association (FPA). Having taken up the Chair of Obstetrics and Gynaecology in Birmingham in the mid 70s, John and his wife, Patricia, offered complex contraceptive clinics, including Norplant and they both provided training to many doctors in those early days.

When the National Association of Family Planning Doctors (NAFPD) morphed into the FFPRHC in 1993, (the change to the current name: Faculty of Sexual and Reproductive Healthcare (FSRH) did not occur until 2007) John was a Board member and took over as the third President in 1997.

His time in this role is marked by the development and implementation of non-consultant Career Grade Training which provided a structured career progression for many doctors, several of whom went on to lead services as Associate Specialists.

During his presidency, the first doctor passed the Membership of the Faculty of Family Planning (MFFP) examination and the Clinical Effectiveness Unit was formed. In 2001 work was being undertaken to establish a mechanism for revalidation of FFPRHC qualifications.

John fostered international connections through his links with the European Board and College of Obstetrics and Gynaecology (EBCOG), the International Federation of Gynecology and Obstetrics (FIGO) and the European Society of Contraception and Reproductive Health (ESC). The U.K. had never hosted an ESC congress, so John put together an application that was successful and the 8th Congress was held in Edinburgh in 2004.

During his period as President the membership continued to grow as did the role and influence of the Faculty, particularly in the areas of training and clinical effectiveness.