New President of the Faculty of Sexual and Reproductive Healthcare elected 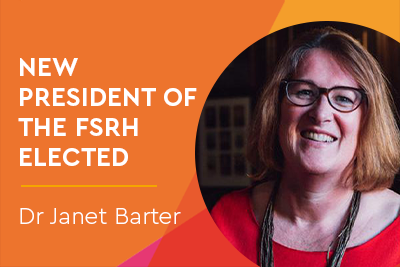 On Thursday 9 June 2022 Dr Janet Barter was elected as the next President of the Faculty of Sexual and Reproductive Healthcare, taking over from Dr Asha Kasliwal after a six-year term.

Janet has a long track record of achievement in her career including being the FSRH Vice President for Specialty, and the Training Programme Director for Sexual and Reproductive Healthcare (SRH) across London. She played an integral role at the FSRH as Chair of the Specialty Advisory Committee and she has sat on FSRH’s Council as a Member representative.

“This is a very exciting time for FSRH and I am truly honoured to be able to contribute to this as President. I look forward to overseeing our work to increase membership engagement and our focus on being a more diverse and inclusive organisation. We will also work to increase our international reach and the breadth of our educational activities in the UK and abroad.

The FSRH has been important to me from very early on in my career as a source of guidance, support and community. I am greatly excited to be given the privilege of representing all members, whoever and wherever they may be.

Finally, I am delighted to be able to build upon the fantastic presidency of Dr Asha Kasliwal, from whose leadership both the Faculty and its members have benefited greatly.”

“I am delighted that Janet has been elected the next FSRH President.

Janet’s expertise, experience and leadership as a FSRH Vice President have been critical in ensuring FSRH is fit for the future. She has been a consistent advocate for the FSRH membership, in all its great diversity, in all that she does.

As I step away from the role of President later this year, I am certain that Janet will continue to lead FSRH to achieve its vision of high quality sexual and reproductive healthcare for all.”

The President Elect will formally be invested on the 22 September 2022 at the Annual General Meeting of the FSRH.