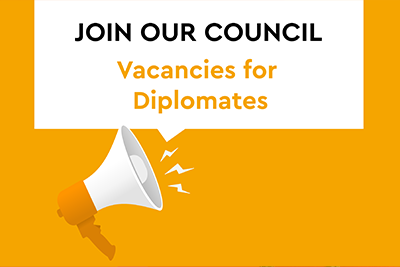 The FSRH Council is the professional membership body of the FSRH, responsible for implementing the Faculty’s mission and contributing its clinical expertise to meeting long-term goals and aims. The Council is comprised of elected FSRH members and nominated external representatives and plays a key role in shaping and overseeing the work of the Faculty, bringing the member voice and experience into our work.

At the AGM in September this year, two of the four elected Diplomate representatives of the Council will come to the end of their terms. Therefore, we have two vacancies for Diplomate to stand for election to Council. This would be for a 3-year term starting at the end of September, renewable for a further 3-years.  Existing representatives are entitled to stand for a second term.

This role description outlines the role of an elected Council member. Council meetings currently take place on a Thursday during the day four times a year.  Meetings are held virtually with one in person meeting in London.  The last Council meeting of 2022 is Thursday 24 November, 11:00 – 15:30 and is a joint meeting with FSRH’s Board of Trustees. 2023 meeting dates are to be confirmed.

In addition to Council meetings, there are other opportunities to support FSRH’s work as a member of Council including representing the Faculty at meetings and getting feedback from members. If elected you would be expected to attend all meetings. If you would like an informal discussion with the CEO or President about standing for election for one of these roles, please contact Helen Davies, Executive Assistant via hdavies@fsrh.org to arrange.

We would particularly welcome applications from those from minority ethnic groups and those from the South West, North East, and Northern Ireland as these are currently under-represented on our Council.

1. Please download and complete this nomination form including signatures* from two current Diplomates to support your nomination, and scan the document so it can be emailed.

2. Please produce a paragraph (no more than 300 words) written in the first person (e.g. “I am”) to support your application (this will be shared with members if there is an election).

Return your nomination form and wording to hdavies@fsrh.org no later than 10:00am 11 July 2022.

*If you are looking for support for your nomination and you are unable to secure the signatures please contact the Director of Membership and Marketing, Gareth Groarke, via ggroarke@fsrh.org before the deadline and he will try to assist you to connect to members to support your nomination.

The a AGM of the FSRH will be held virtually on Thursday 22 September 2022 at 17:00-17:30. A formal notice, together with a link to the annual report and accounts, will be sent to all members in due course.

Please note, that as per FSRH governance arrangements, elections to Council roles are normally announced four months prior to the FSRH Annual General Meeting (AGM). In 2022, due to the change over date of the outgoing President and the President elect, the 2022 AGM will take place on 22nd September, which is six to eight weeks earlier than date of previous AGM’s. This means that the Council elections are being announced three months earlier than the AGM date this year. This provides sufficient time for the election process, but if you have any concerns regarding the 2022 timescale, please contact the FSRH Chief Executive, Gary Waltham, via hdavies@fsrh.org.