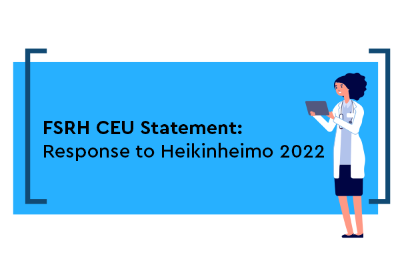 This cohort study, which used information from Finnish databases, assessed incidence of confirmed venous thromboembolic (VTE) events in 2018/19 amongst the roughly 300,000 Finnish people aged 15-49 who were using hormonal contraception (HC) in 2017 (identified from the prescribing database) and age-matched controls who were not using hormonal contraception. A nested case-control study based on the 1334 incident confirmed VTE cases and four age-matched controls for each case considered the effect of use (new start or continuation) of combined hormonal contraception (CHC) and desogestrel and norethisterone progestogen-only pills on VTE risk.

The incidence of VTE across the whole cohort of users and non-users of HC aged 15-49 was 1.14 per 1,000 person years. Incidence was higher in the older than in the younger age groups (compared to 15 to 19-year-olds, 40 to 44-year-olds had a rate ratio for VTE of 5.10 (CI 3.83-6.57). It is noted that the risk of VTE reported for non-users of HC aged 15-49 (0.94 per 1,000 person years) was higher than that in previous studies. The authors postulated that this could reflect improved diagnostic imaging or increasing levels of obesity. For users of HC as a group, risk ratio for VTE was 1.42 (CI 1.27-1.58) compared to non-users of hormonal contraception. Prescribing bias - particularly relating to adherence to CHC prescribing guidelines which avoid CHC use by individuals with significant VTE risk factors - may well influence the size of this observed effect. BMI, smoking and family history of VTE could not be controlled for because this information was not available from the databases.

In the nested study, small numbers of users of some HC methods and incomplete data for use of long-acting reversible contraceptive methods restricted the contraceptive preparations considered; thus combined oral contraception (COC) containing ethinylestradiol with levonorgestrel or norgestimate, the progestogen-only implant, the levonorgestrel-releasing IUS, depot medroxyprogesterone acetate and the levonorgestrel POP were not evaluated and no differentiation was made between COC preparations containing different doses of ethinylestradiol.

No association was observed for combined pills containing estradiol/nomegestrol or for norethisterone or desogestrel progestogen-only pills. The small increased risk associated with use of estradiol valerate/dienogest was non-significant.

It is noted that the study has the significant limitation (in addition to prescribing bias as noted above) that numbers of users of some of the included HC preparations are very small.

This Finnish cohort study which drew data from databases reported a higher incidence of confirmed VTE amongst non-users of hormonal contraception aged 15-49 (0.94 per 1,000 person years) than older studies.

Compared to non-use, the group of users of the ethinylestradiol-containing the CHC preparations that were included in the study (excluding cyproterone acetate with ‘estrogen’) were at roughly twice the risk of VTE (adjusted odds ratio 2.15 (CI 1.78–2.59). Risk varied between the different CHC’s included.

The small increase in VTE risk associated with use of estradiol-containing COC was not significant (adjusted odds ratio 1.05 (CI 0.66–1.66).

Use of progestogen-only pills did not affect VTE risk.

It is noted that not all COC products were included, no differentiation was made between preparations containing different ethinylestradiol doses, and numbers of users of some methods were very small. DMPA, Nexplanon and LNG-IUS devices were not included. The size of the reported effect of use of CHC on VTE risk could well be affected by prescribing bias – the available data did not allow control for VTE risk factors.

This study has methodological limitations, and does not consider all commonly used hormonal contraceptive methods, but it:-

No change to FSRH CEU guidance is required to reflect these findings. Further study is required to investigate effect of estradiol-containing COC on VTE risk. At present, guidance indicating avoidance of use of CHC by individuals with risk factors for VTE continues to apply to all CHC, including those containing estradiol. Progestogen-only contraception without associated increase in risk of VTE should be advised where VTE risk factors are present.

The full statement is available below to view and download.