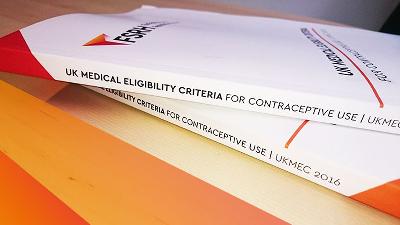 The UKMEC category for use of progestogen-only injectable contraception and intrauterine contraception by women at high risk of acquiring HIV is changing from UKMEC2 (benefits of use generally outweigh risks) to UKMEC1 (no restrictions to use).

In formulating the new recommendation, the GDG considered the findings of an updated systematic review of relevant evidence. This included new, high quality evidence from a recent large randomised controlled trial (the Evidence for Contraceptive Options and HIV Outcomes (ECHO) study2). The evidence base for previous guidance had consisted of observational studies of lower quality, with potential for unmeasured confounding; it suggested an association between use of DMPA (but not other contraceptive methods) and HIV acquisition amongst women at high risk of HIV.

The new WHO recommendation takes into consideration both the updated evidence base and the values, preferences, views and concerns of contraceptive users.

In line with recent update of WHO guidance, and after consideration of the evidence that has emerged since 2016, the group that developed UKMEC 2016 recommends that, for the UK population, contraceptive choice should not be restricted by the fact that a woman is identified as being at high risk of HIV. UKMEC 2016 will be amended so that use of all contraceptive methods is UKMEC1 for women at high risk of HIV.

Read the full statement from the UKMEC 2016 Guideline Development Group below.