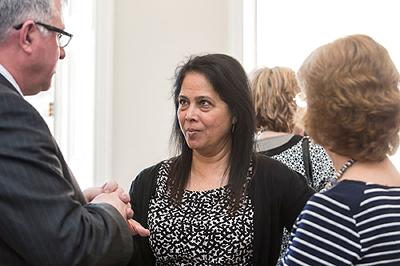 Clinical Director & Consultant in Community Gynaecology and Reproductive Health, Dr Asha Kasliwal has been elected as the new President of the FSRH. Asha is based at the Central Manchester University Hospitals NHS Foundation Trust and she takes up the Presidential office on July 28th 2016.

“I am delighted to announce that Dr Asha Kasliwal has been elected as the next President of the FSRH.

Asha was made President-elect during Council elections in May 2016, and will take up her appointment at the FSRH’s AGM on 28th July 2016.

Asha has been involved with the FSRH for over a decade initially as a member of the Clinical Standards Committee, then as its chair and over the last few years as Vice President (VP) for Clinical Standards. She has played an important role in leading on standards at the FSRH and in a leadership role as part of Council. She is both a Fellow of the FSRH and the RCOG.

She is an experienced SRH consultant who has lead significant change and improvement in the services she oversees in order to increase patient access, improve standards and keep and motivate staff; all against the a difficult backdrop of budget cuts and fragmentation of commissioning. She is also passionate about clinical standards and is a NICE specialist committee member working on ‘Quality Standards for Contraception’.

Asha has said her priorities once in office will be:

It has been an honour to be President of the FSRH for the last five years and I delighted to be handing over to Asha in July. I am confident the FSRH will continue to thrive under her leadership.”