The abortion care factsheet is a free resource for professionals in secondary schools to use in relationships and sex education (RSE) lessons. It aims to ensure that professionals involved in educating young people have a factually accurate, unbiased and evidence-based source of information about abortion in the UK.

Who produced the factsheet? 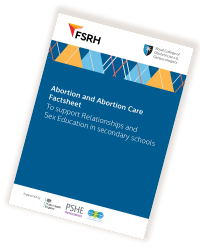 The factsheet  was produced by the Royal College of Obstetricians and Gynaecologists (RCOG) and the Faculty of Sexual and Reproductive Healthcare (FSRH).

The FSRH-RCOG abortion factsheet is officially endorsed by Public Health England, an executive agency of the Department of Health and Social Care, the PSHE Association and the Sex Education Forum.

RCOG and FSRH are two medical professional membership bodies that produce evidence-based guidance and standards in termination of pregnancy, sexual and reproductive healthcare, gynaecology and obstetrics. Together, we have leveraged our expertise in women’s healthcare and produced a resource that can be used in all secondary schools across the UK.

Why has this factsheet been produced?

A 2012 Ofsted evaluation of Personal, Social, Health and Economic Education (PSHE) and RSE delivery in primary and secondary schools in England found that teachers needed more support and training to teach sensitive and controversial RSE themes. The draft RSE guidance out for consultation last year recommends that schools cover all pregnancy options, including abortion, in a way that is medically and legally accurate. Yet tools and training for teachers in such topics are very limited, which makes resources such as the FSRH-RCOG leaflet even the more crucial.

Despite being a common medical procedure, myths about abortion and stigma are widespread, including in the classroom. We aim to change that. The factsheet counters myths that are known to be taught in schools such as abortion causing infertility and mental illness.

Education for Choice, a project led by the young people’s charity Brook, released a report in 2013. Education for Choice investigated the state of abortion education in schools during a 10-month period. It found that some teachers and external speakers delivering lessons on abortion had been using materials which were inaccurate, biased and often stigmatised abortion. According to the report, these are not isolated incidents, and a number of schools are known to be using inaccurate or heavily biased information to teach about abortion.

Pupils deserve and have the right to impartial, medically-accurate information.

What is the Myth Busters section in the factsheet?

This is a section that deconstructs common misconceptions about abortion and abortion care. This section includes clear, simple statements with correct information to counter widespread myths.

Is the abortion factsheet a resource for relationships and sex education (RSE) lessons? Who can use it?

Yes. The abortion factsheet is a tool to support relationships and sex education (RSE) lessons in secondary schools in the UK. It is intended for use by teachers, school nurses, pastoral staff, youth workers and others directly or indirectly involved in the teaching of RSE.

Comprehensive RSE cannot shy away from addressing abortion as an integral part of sexual and reproductive healthcare. If young people are to be equipped with empowering knowledge on sexual and reproductive health and how to avoid unplanned pregnancies, they need to learn not only about STIs and contraception, but also abortion. For that to be achieved, we aim to support schools to teach evidence-based, factual information on abortion.

How can the subject of abortion be handled in a way that is sensitive to students of different backgrounds and faiths?

Young people have the right to access factually accurate, unbiased information about sexual and reproductive health and how to avoid unplanned pregnancies in schools, including abortion. It is crucial that abortion is taught in age-appropriate, comprehensive relationships and sex education (RSE) lessons in secondary schools.

Being sensitive to students of different backgrounds and faiths means respecting them intellectually and providing them with the most accurate, evidence-based information on abortion instead of biased and inaccurate information. The FSRH-RCOG leaflet is one example of a resource to help teachers to handle such topics.

Who is officially endorsing the FSRH-RCOG abortion factsheet?

The FSRH-RCOG abortion factsheet is officially endorsed by Public Health England, an executive agency of the Department of Health and Social Care, the PSHE Association and the Sex Education Forum.

What is the role of the Department for Education?

FSRH and RCOG would like to see the Department for Education (DfE) endorse the factsheet as a recommended resource for schools.

FSRH and RCOG would also like to see DfE develop a national specification setting out an essential checklist of themes, resources and national guidelines encompassing mandatory topics such as “contraception and reproductive health” and “non-biased information on pregnancy options, including abortion”. This is particularly relevant in the context of schools that have flexibility in determining lesson delivery and content.

DfE can also support schools to ensure that staff teaching RSE receive subject-specific training and regular updates, including in the teaching of sensitive issues.

How can schools/teachers best access objective and impartial resource materials?

The FSRH-RCOG abortion factsheet provides a list of useful resources and can be downloaded for free.

The PHSE Association awards a Quality Mark to resources that meet its ten principles of effective PSHE education. A list of PHSE resources which have been quality-assured by PHSE and awarded a Quality Mark can be found here.

Who should I contact about the FSRH-RCOG abortion factsheet?

You can contact Harry Walker, Head of External Affairs at FSRH at externalaffairshead@fsrh.org.

If you have a media enquiry, you can contact Camila Azevedo, External Affairs Manager at FSRH, at externalaffairsmanager@fsrh.org