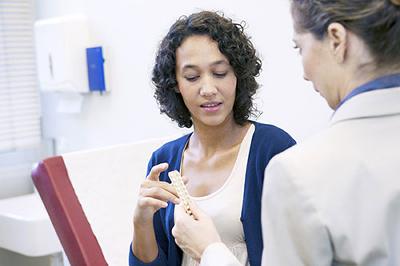 There are about 11,000 cases of cancer in people aged between 15 and 40 every year in the UK. Long term survival rates are increasing, in this group and in younger children: at least 1 in 1,000 adults are childhood cancer survivors. So professionals need to know how to care for their sexual and reproductive health.

Typical cancers in under-15 year olds include acute leukaemias, brain and spinal tumours. For older teens, these are joined by lymphoma, testicular cancer, malignant melanoma and bone or connective tissues sarcomas. In young adults, the most common are malignant melanoma, breast, cervical and colorectal cancer.

"Loss of fertility is the most significant impact," Dr Talaulikar said.

Chemotherapy damages the ovarian follicles and depletes the number of eggs. The age of the woman and the intensity of the chemotherapy are two important determinants of the extent of damage.

"The younger the patient the less the effect on the ovary. A very young girl who has had chemo is likely to retain most of her eggs," said Dr Talaulikar. But she may experience menstrual dysfunction, subfertility and premature ovarian insufficiency.

Even after apparent recovery, some women may still have a depleted number of eggs. They will always be at risk of early menopause.

One study of 14,000 patients who were treated for cancer when they were under 21 in the US and Canada showed long-term pregnancy outcomes similar to the general population: 63% live births, 15% miscarriages, 17% abortions and 1% stillbirths. Detailed analysis did show adverse effects of pelvic radiation.

So many cancer survivors can be reassured.

"It’s important to identify patients at risk of infertility, both male and female, and provide them with information and develop long-term plans to monitor their gonadal function," said Dr Talaulikar.

Women need to know that fertility declines sharply after the age of 37, so if they do want to have children it’s a good idea to act much earlier.

A normal menstrual cycle "is a poor predictor of long-term fertility". A woman who has had cancer treatment and doesn’t have any periods can be fertile. There aren’t any gold standard tests but blood tests for Anti-Mullerian Hormone (AMH), combined with an antral follicle count (AFC) using ultrasound are the best available markers of ovarian reserve.

These tests help to predict the potential response to IVF but not the chances of natural pregnancy and live birth. Predicting the extent of reproductive impairment and the window of fertility is challenging. At best, you can give a reasonable estimate, say “over next five years you have enough eggs or not enough eggs.”

Contraception is still required for those who aren’t planning a pregnancy.

One young woman had a bone marrow transplant (with AMH under 0.2 pmol/L) and was taking HRT. After a sports injury, she was diagnosed in A&E with an 11-week pregnancy. After multidisciplinary care, including cervical length monitoring, she delivered a healthy, full term baby girl.

Pregnancy while undergoing chemo- or radiotherapy can cause miscarriage, premature delivery and birth defects. Some contraception can be contraindicated after certain treatments: pelvic surgery and parenteral nutrition carries a risk of thrombosis, so oestrogen should be avoided. Progestin is usually preferable; the progestin-only pill, implant or Depo-Provera.

Premature Ovarian Insufficiency (POI) is a common result of cancer treatment. In the short term, it can cause hot flushes, night sweats and other menopausal symptoms, including poor memory and concentration. Long term effects include loss of bone mineral density, increased cardiovascular risk and possibly cognitive or neurological problems.

Oestrogen replacement is important, with the combined pill or HRT. Women may need induced puberty with oestrogen, starting with low doses and aiming to mimic the natural progression. HRT is used if puberty was completed, and for induced puberty it can be added later. It is recommended until the age of natural menopause (51). Dr Talaulikar says HRT is preferable to the combined pill as it provides natural oestrogen in physiological doses.

There are very few contraindications for HRT, it offers lower blood pressure and potentially better bone mineral density. In young women with POI, HRT doesn’t have the excess health risks that can affect older women (such as breast cancer and stroke).

But it carries a stigma. The pill is more socially acceptable, free on prescription, and offers contraception as well. His take-home messages?

"The main reproductive late effects of cancer are sub-fertility and POI but many women remain fertile, so contraceptive advice is important. POI has a major impact on physical and psychological well-being. Oestrogen replacement plays a vital role in improving the quality of life and preventing long term health problems."